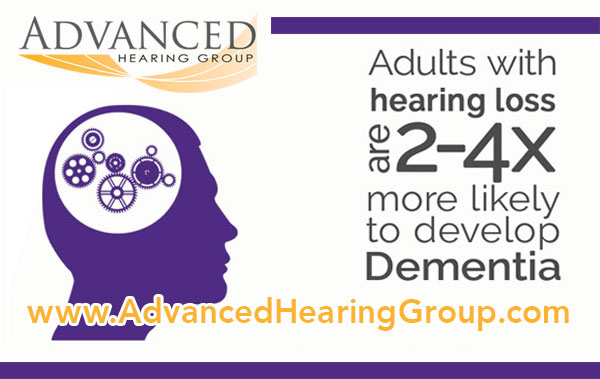 Why Does Hearing Loss Contribute to Cognitive Decline?

Hearing loss is a common development as we age; allowing it to go untreated, however, can lead to some serious complications. One vital concern with untreated hearing loss is cognitive decline. A Johns Hopkins study determined that individuals with mild hearing loss were two times more likely to develop dementia than those with normal hearing. That number increases to three times for moderate hearing loss and up to five times for severe loss.

Mild cognitive impairment, including Dementia and Alzheimer’s, can be caused by untreated hearing loss.

What Can I Do?

Early intervention is absolutely critical and may lessen the impact hearing loss has on cognitive function and slow the decline. Call Advanced Hearing Group to schedule an evaluation and a hearing test – we are here to help.

We want to thank Dr. Johnson and the staff at the South Scottsdale office, for their prompt service, when I had a problem, with one of my hearing aids. They saw me within an hour of my call to their office and resolved the problem, in a few minutes. We appreciate a business that is so helpful and caring.

I had a hearing aid quit on me. I went into the Mesa location and was greeted by a pleasant young lady and was promptly helped to get my hearing aid working again. And there was no charge !!Great service and pleasant staff. What a great experience !!